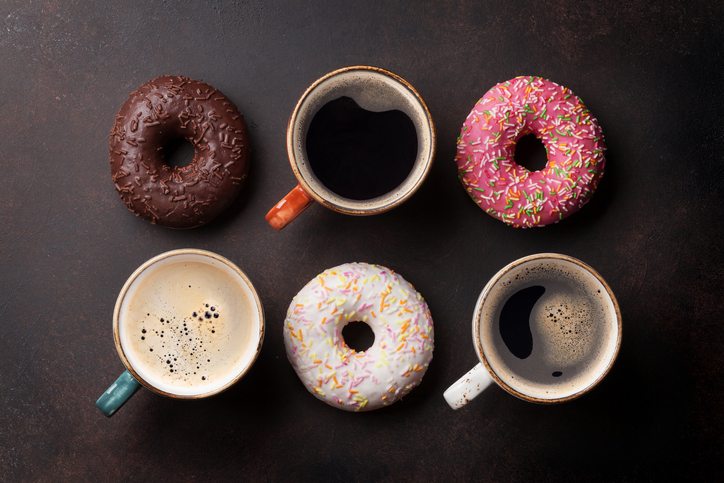 You’d have to be the best dentist in Portland or possess superhuman willpower to never give into those occasional cravings most of us have for something a little sweet. In fact, for most Americans, the only thing we have a harder time resisting than the need for something sweet is the jolt that comes from caffeine. This is why people seemingly lose their minds over Starbucks annual Pumpkin Spice Latte this time of year, as it simultaneously provides us the two things we crave the most.

However, a new study conducted by researchers at Cornell University suggests that caffeine consumption may play a more nefarious role in how often we crave sugar.

Caffeine has a powerful effect on the body’s ability to resist adenosine receptors, which promote sleepiness and relaxation. While depressing the effectiveness of these receptors may make us feel more awake, researchers have found that is also decreases our ability to tastes sweetness, making the foods and drinks we consume taste less sweet. This in turn leads us to feel an increased temptation for sweets, according to researchers.

Is Caffeine the Cause of Cravings?

In the new study, researchers at Cornell Department of Food Science attempted to determine what impact caffeine consumption could have on the body’s ability to taste and recognize sugar. Researchers suspected that drinking caffeinated coffee, for example, would change how the body perceives taste for however long the effects of the coffee were to last. That means eating something directly after or along with drinking your coffee – such as a donut or Danish – or other caffeinated beverage will cause the body to perceive food differently than normal.

In a blind study, one test group sampled decaffeinated coffee that had 200 mg of caffeine added to it to make the drink the equivalent to a strong cup of coffee. Another test group drank decaffeinated coffee that contained a bitter concentration of quinine used to simulate the taste of caffeine. Both groups had sugar added to their coffee. During a second test session on a different day, the two groups were alternated. Participants rated the caffeinated coffee as less sweet but didn’t report a similar impact on their ability to taste the other flavors of salty, sour, bitter, or umami.

In the second part of the study, participants discussed their level of alertness with researchers, while also estimating the amount of caffeine in their coffee. Participants reported experiencing the same level of alertness after drinking both the caffeinated and the decaf coffee, and could not correctly determined which type of coffee they consumed.

This led researchers to believe that a placebo or conditioning effect may exist when it comes to drinking coffee. In other words, the very act of drinking coffee is so associated in our minds with feeling more alert and stimulated that we subconsciously manifest these feelings even if consuming decaf.  This would explain why the study participants who consumed decaf coffee still reported feeling the effects normally associated with caffeine.

So What’s the Big Deal?

So drinking coffee makes it harder to notice how much sugar we’re consuming, no big deal right? Well not exactly. Remember that Pumpkin Spice Latte we mentioned earlier? It actually contains 50 grams of sugar in just one 16-ounce cup. For the sake of comparison, the FDA recommends that no more than 10 percent of your daily calorie intake come from added sugar. That’s roughly 50 grams if you’re on a 2,000 calorie a day diet. Other organizations, such as the American Heart Association, recommend no more than 25 grams a day for women and 38 grams a day for men.

No matter which standard you go by, you’re essentially meeting or exceeding your entire day’s sugar intake by the time you finish your latte.

You would think that drinking something so sweet would come across tasting like a cup of liquid candy. But thanks to coffee’s ability to mask how we taste sweetness, many people who enjoy overly sweet caffeinated beverages would be surprised to realize just how much sugar they’re consuming.

Here’s where coffee’s effects become the most troubling for our oral and overall health. It enables us to add additional sugars to our diets without really being aware of just how much sugar we’re consuming. You don’t need to be the best dentist in Portland to know just how damaging a diet high in sugar can be to an individual’s oral health and waistline.

Even more troubling, by drinking excess amounts of sugar we trigger a craving in our brains for more sugar. And since we don’t realize how much sugar we’ve already consumed, we’re more likely to satisfy those cravings by eating or drinking something sweet. This continues the cycle until we start to consume an unhealthy amount of sugar each day.

So the next time you place your morning coffee order, just remember that you might be getting more in your cup than you’re bargaining for.